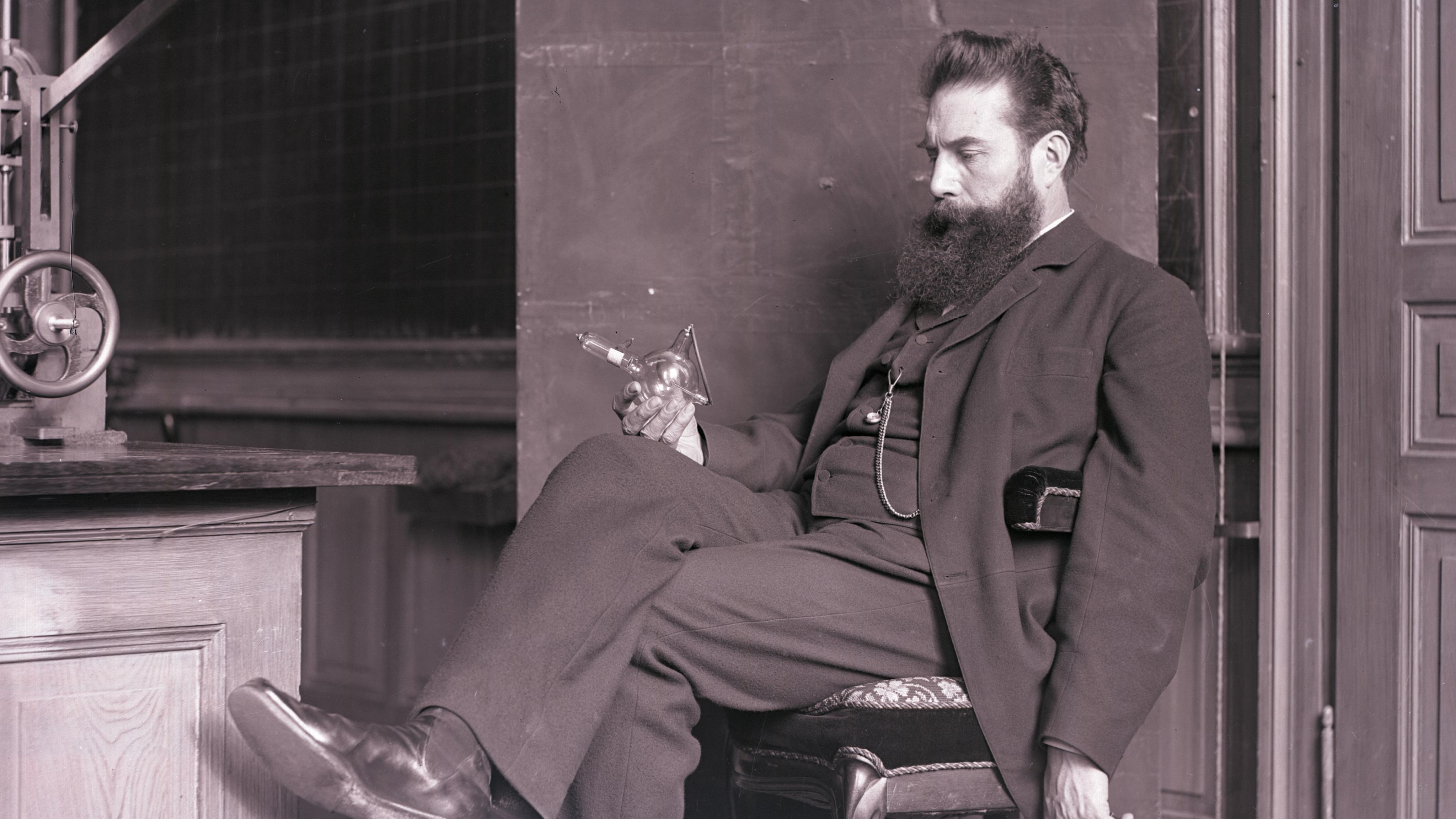 Röntgen sits model for a statue, in his hand one of the smaller versions of the first medical X-ray tube in the history of Siemens Healthineers. (Source: German Röntgen Museum)

Today it's commonplace, but at the time it was a medical-technical revolution - the discovery of X-rays by Wilhelm Conrad Röntgen 125 years ago in Würzburg. His discovery on November 8, 1895 heralded a new era in medicine that provided previously unknown insights into the human body. A short time later, Siemens & Halske and Reiniger, Gebbert & Schall (RGS) - the two predecessor companies of Siemens Healthineers - concentrated on the industrial production of X-ray tubes and apparatus, thus making a decisive contribution to the further development of the technology. Today, X-ray technology is the basis for imaging in many medical devices and is therefore an integral part of everyday life. Siemens Healthineers is taking the anniversary as an opportunity to honor Wilhelm Conrad Röntgen's groundbreaking discovery, which has positively changed people's lives, with a comprehensive theme year.

“125 years ago saw the launch of the industrial use of X-ray technology which we have decisively shaped from the very beginning. We still embody this spirit of innovation today. Thanks to its strong technological base and deep clinical expertise, Siemens Healthineers is uniquely positioned to shape the digital transformation of healthcare today,” said Christoph Zindel, Member of the Managing Board of Siemens Healthineers AG.

In the ”Year of X-rays 2020”, Siemens Healthineers illuminates a different aspect of X-ray technology every month. The anniversary website “125 years of X-rays” will offer new background information, historical articles and videos throughout the year. The Siemens Healthineers MedMuseum in Erlangen will showcase a variety of historical exhibits, including an X-ray machine from 1902 and the first CT scanner from Siemens from 1975.

At the Siemens Healthineers site in Rudolstadt, the first X-ray tube manufactured by Reiniger, Gebbert & Schall, and purchased by Röntgen is being recreated, which is a challenge due to its historical design.

Wilhelm Conrad Röntgen, who taught in Würzburg as a physics professor, discovered the rays – he himself used the term X-rays – by accident while experimenting with gas discharges produced in a glass tube with two molten electrodes. The resulting glow can be observed with the help of a flourescent screen. When he wrapped such a glass tube in a light-proof manner and darkened the room, he noticed by chance that a fluorescent screen next to the tube began to glow in the dark, even though the tube was wrapped to not emit any visible light. He increased the distance, but the radiation appeared unchanged, only platinum and lead could stop it. Eventually he held his hand in the rays and saw the shadows of his hand bones on the fluorescent screen. As proof, he recorded his discovery with the help of photography. This was the birth of X-ray technology. Just three days after the discovery of the X-rays, Reiniger, Gebbert & Schall set about developing the first X-ray tube which was later purchased by Röntgen. X-ray technology continues to be widely used in Siemens Healthineers' portfolio today: from computed tomography and mammography to classical radiography. In addition, Siemens Healthineers offers innovative, image-based therapy concepts and minimally invasive procedures with its angiography systems and mobile C-arms.

Siemens Healthineers AG (listed in Frankfurt, Germany: SHL) is shaping the future of Healthcare. As a leading medical technology company headquartered in Erlangen, Germany, Siemens Healthineers enables healthcare providers worldwide through its regional companies to increase value by empowering them on their journey towards expanding precision medicine, transforming care delivery, improving the patient experience, and digitalizing healthcare. Siemens Healthineers is continuously developing its product and service portfolio, with AI-supported applications and digital offerings that play an increasingly important role in the next generation of medical technology. These new applications will enhance the company’s foundation in in-vitro diagnostic, image-guided therapy, and in-vivo diagnostics. Siemens Healthineers also provides a range of services and solutions to enhance healthcare providers ability to provide high-quality, efficient care to patients. In fiscal 2019, which ended on September 30, 2019, Siemens Healthineers, which has approximately 52,000 employees worldwide, generated revenue of €14.5 billion and adjusted profit of €2.5 billion.