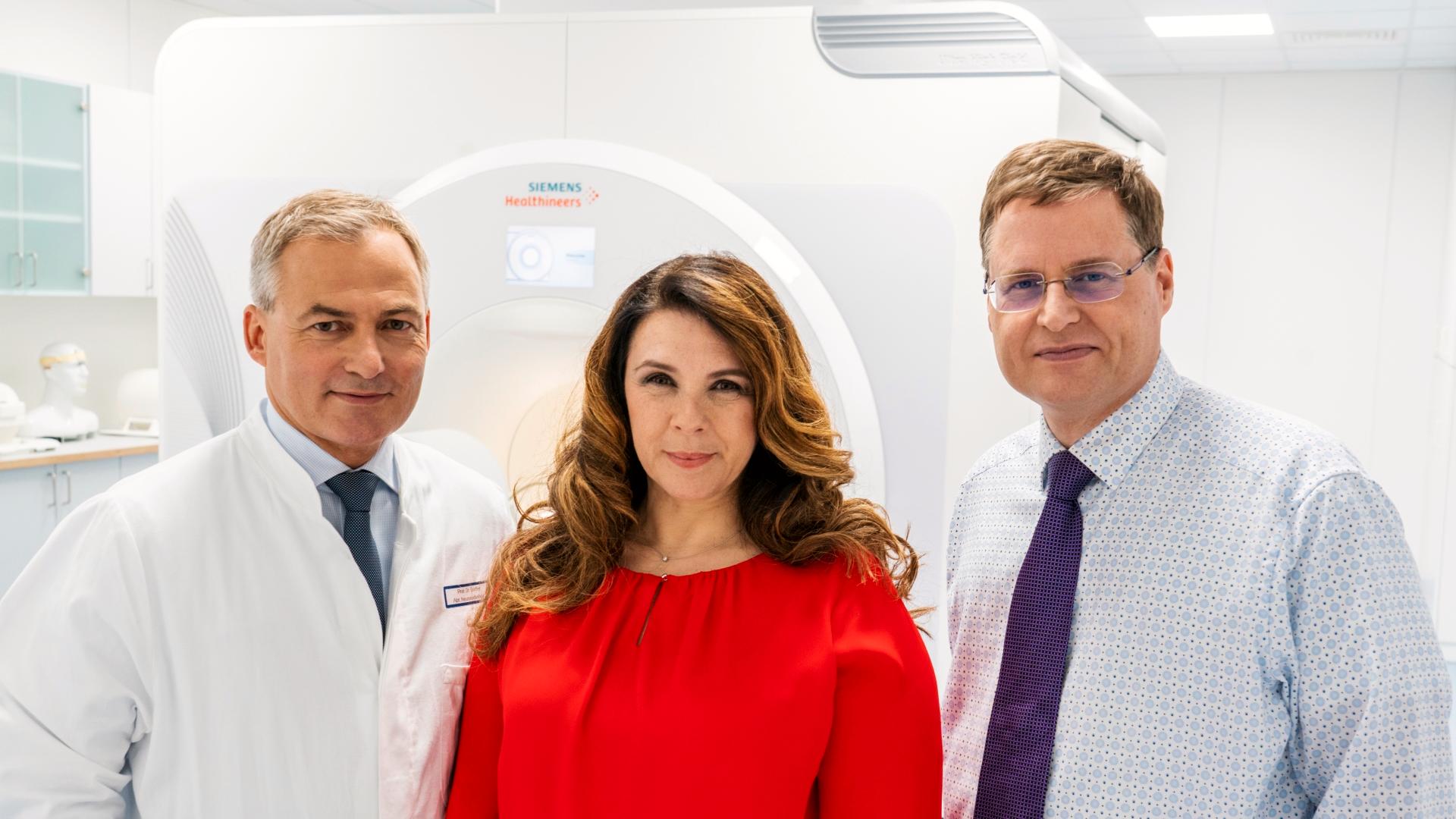 Not for publication in the USA

Christina Triantafyllou, Ph.D., an employee at Siemens Healthineers, has been nominated for the German Future Prize for her work on Magnetom Terra, the first ultra-high field magnetic resonance scanner approved for clinical use. Nominated with her are Professor Arnd Dörfler, MD, Head of University Hospital Erlangen’s Department of Neuroradiology, and Professor Mark E. Ladd, Ph.D., Head of the Division of Medical Physics in Radiology at the German Cancer Research Center in Heidelberg. They are one of three research teams in contention for the award. The prize, awarded by the President of Germany, is one of the country’s highest distinctions for technology and innovation.

Thanks to the efforts of the team led by Christina Triantafyllou – who is responsible for ultra-high field MRI solutions at Siemens Healthineers – and together with MRI experts at the company as well as other collaboration partners, imaging at a magnetic field strength of 7 Tesla – previously used only in basic research – has been available as a novel and effective diagnostic tool for clinical use since 2017. This development is a breakthrough for precision

medicine and brings immediate benefits for patients. Because with its ability to accurately image even tiny structures measuring down to 0.2 mm, Magnetom Terra opens up new opportunities for early diagnosis and personalized treatment of neurological diseases such as multiple sclerosis (MS), epilepsy, and Parkinson’s disease in particular. The German Future Prize will be awarded by Germany’s federal president, Dr. Frank-Walter Steinmeier, on November 27, 2019, in Berlin.

“Along with the entire team at Siemens Healthineers, I am delighted by this nomination for the German Future Prize. The choice underlines our successful cooperation with research partners around the globe,” said Dr. Bernd Montag, CEO of Siemens Healthineers. Siemens Healthineers draws on a collaborative network of over 4,400 research partners all over the world. In fiscal 2018, the company invested around €1.3 billion in research and development, an area in which it employs some 8,800 people. Siemens Healthineers boasts a portfolio of over 18,500 patents, patent applications, and utility models. “The development and clinical approval of Magnetom Terra are illustrative of the strengths of Siemens Healthineers: The close ties between our own research and development team and the expertise of leading institutions in the fields of medicine and research enable us to swiftly bring innovations to market, providing value to users, and enhancing patient well-being. Clinical use of 7 Tesla imaging helps neuroradiological experts detect pathological changes such as MS or Parkinson’s disease at an early stage and offer targeted treatment. This is an outstanding example of the benefits that can be achieved by expanding precision medicine,” said Montag.

Early diagnosis for effective treatment
In the early stages of MS and neurodegenerative diseases such as dementia and Parkinson’s disease, it is often the case that pathological changes are often not sufficiently pronounced to allow diagnosis using clinically established MRI systems with lower field strengths. Consequently, valuable time is often lost before diagnosis and the start of treatment. By contrast, the ultra-high field scanner Magnetom Terra from Siemens Healthineers offers imaging with an extremely high level of detail that can reveal such minute changes in anatomy and even organ function. In addition, the system’s innovative imaging technology can identify pathological changes at the metabolic level that may be invisible with anatomical imaging.

The field strength of 7 Tesla – which is around 140,000 times stronger than the Earth’s magnetic field – yields remarkable results: While in the past clinical imaging could only detect pathological changes in the advanced stages of MS, at 7 Tesla these changes have been observed early on. Particularly for younger people, who make up the majority of MS patients, early diagnosis and swift treatment are key to delaying a subsequent disability or preventing it altogether. For epilepsy – one of the most common neurological diseases, with around half a million patients in Germany alone – Magnetom Terra’s superior anatomical resolution helps locate and diagnose seizure foci more accurately. This enables more precise planning for surgical interventions, often allowing the quality of life of those affected to be restored to pre-seizure levels. In addition to providing important benefits in neurological issues, the Magnetom Terra is also suited to clinical assessment of musculoskeletal disorders. Tests are currently underway for using Magnetom Terra in other areas of clinical application, such as prostate imaging.

In terms of key achievements in hardware technology, Magnetom Terra uses a specially developed, innovative actively shielded magnet. Despite its higher performance, it weighs only half as much as the magnets used in previous generation of 7 Tesla systems. This makes Magnetom Terra vastly easier to transport and facilitates a smoother simpler integration with existing hospital infrastructure. Another innovation is its dual mode functionality, that allows users to seamlessly switch between clinical use and research applications. The system is therefore an ideal platform for translational research: Patients can benefit from the latest research findings without delay. Numerous installations in leading hospitals around the world suggest that 7 Tesla imaging will become an integral part of many large teaching and research hospitals in the medium term.

Successful collaboration between industry and research, and physics and medicine
The work of physicist Christina Triantafyllou, Ph.D., at Siemens Healthineers was a driving force behind the development of Magnetom Terra, which laid the technical foundations for the clinical application of 7 Tesla imaging. Univ.-Prof. Dr. sc. techn. Mark E. Ladd, head physicist at the German Cancer Research Center in Heidelberg, provided key input when the first 7 Tesla MRI systems for research purposes were installed at University Hospital Essen and in Heidelberg in the 2000s. Since then, he has played a major role in further developing 7 Tesla imaging. Radiologist and neuroradiologist Univ.-Prof. Dr. med. Arnd Dörfler has also been involved with the new system since the development stages. He played a key role in the clinical implementation and validation of the world’s first 7 Tesla MRI scanner for clinical use at University Hospital Erlangen, and in the clinical approval process for the Magnetom Terra.

The German Future Prize was founded in 1997 by the then German president, Dr. Roman Herzog, and has since come to symbolize the country's scientific potential and innovative spirit. Besides excellence in research, the main selection criteria considered by the jury include the patentability and market viability of the technology. The prize, which is endowed with €250,000, was also awarded to Siemens employees in 2004, 2005, 2007, and 2012.