Markus Tiemann, MD, is the Chief Executive Officer and founder of the Institute for Hematopathology in Hamburg, Germany. During the 2017 American Society of Clinical Oncology meeting in Chicago, Markus Tiemann discussed molecular pathology, clinical decision-making in oncology, and his recent collaboration with the Siemens Healthineers daughter NEO New Oncology in the field of molecular tumor diagnostics.

The Institute for Hematopathology in Hamburg led by Markus Tiemann, MD, has experienced exceptional growth and success, starting as a small pathology group 12 years ago to become one of Germany's largest private pathology clinics today. Tiemann explained: "We started with three technicians, one secretary, and two doctors. Now, we have 31 doctors and 198 staff." Since opening, the laboratory space has grown from 400 to 9,000 square meters.

What are your personal clinical interests?

Primarily, I'm a hematopathologist by training. In terms of specialisms, I mainly deal with diagnosis of lymphoma and leukemia. Over the past ten years or so, my interests in molecular pathology have grown to include solid tumors such as those found in lung and colorectal cancers. At the Institute for Hematopathology, our specialists cover now the entire spectrum of solid and hematological cancers.

How does the Institute function from a clinical perspective?

The Institute for Hematopathology is a laboratory that handles specimens sent to it from referring physicians. The patient goes to the oncologist or hematologist who decides if a tissue biopsy, peripheral blood or a bone marrow sample is necessary to make a correct diagnosis. The sample is sent to us and we provide a diagnosis so the hematologist and oncologist can start therapy.

What do you attribute your rapid growth and success to?

Good service, good quality, quick turnaround time, and innovation. Accessibility to the referring physicians has greatly improved their confidence in our diagnostics. Accordingly, word spread quickly throughout the cancer medical community. This focus on clinical support and care with an innovative and fast workflow was new. In a university hospital setting it is rare to receive direct input from the pathologist performing diagnostics due to their research and teaching demands. A key to our success – especially in the field of molecular diagnostics – was our quick turnaround time for diagnostic results to enable treatment right away.

Can you explain how quicker turnaround times have influenced clinical care?

The normal pathology lab needed three to six weeks to determine even very basic molecular markers relevant for a treatment decision, so conventional therapy was started and there was no chance for more modern, individualized therapy. It was very common for a patient to be an excellent candidate for an individualized therapy that would specifically address the characteristics of their disease, but the testing took so long that chemotherapy was started because the oncologist did not want to risk adverse events while waiting for the results.

This is one of the reasons I started to collaborate with NEO New Oncology - because they achieved a quicker answer to the search for all relevant treatment markers, meeting our clinical target of providing fast results to the oncologist. My perspectives have changed over my career: Time is as important as quality. Before, from a university perspective, I thought quality was most important and time is less important. That’s wrong, they are equal.

Describe a common challenge you would observe on a day-to-day basis.

A 55-year old man presents with a histological diagnosis of colorectal cancer. This is a particularly important challenge because the patient needs the best possible information regarding his individual cancer in order to determine not only his treatment plan, but also his life plan. Today, I can get much more information, including functional mutations in the tumor that influence response to therapy, to determine prognosis and formulate a treatment plan. Furthermore, the challenge is to get this information to the patient in the shortest possible time so he knows what to expect and what to plan for. Modern chemotherapy is quite intensive; if a patient’s tumor carries certain mutations, the early recurrence rate is very high. We want to protect patients from chemotherapy, unless they are likely to benefit from it. Therefore, the challenge is to identify the mutations where alternative therapies are more beneficial.

"It is no longer inevitable that patients survive cancer not just weeks or months. Now, they are surviving years because cancer is changing from a deadly disease to a chronic disease - and even to a chronic disease with reasonable quality of life. This is fascinating to me. Today, we are seeing younger stage 4 patients with extensive tumors and affected organs surviving and even returning to work - unheard of before."

What changes have you witnessed in cancer evaluation and treatment over the years?

The changes have come very fast, with recent changes dependent upon the development of new drugs and new therapy strategies. In the past, diagnostics just required histological staining of the tumor tissue, which is very cheap. Today, the pathologist has to identify the subtype of tumor along with molecular profiling – not only to identify the tumor but also to determine which individualized therapy is the most appropriate. This is a great step forward. Pathologists have seen a revolution in their own profession that is paradigm-changing.

“Pathologists have seen a revolution in their own profession that is paradigm-changing.”
Markus Tiemann, MD, CEO, Institute for Hematopathology, Hamburg, Germany

What are the major challenges for the future?

Liquid biopsy is one major challenge for the future: Will it be possible to detect a tumor from peripheral blood? I don’t think so, because the specificity of mutations is not overt – several different tumor types can harbor with the same mutations. The clinical possibilities from using small circulating tumor DNA samples from peripheral blood are fantastic to monitor the activity of a known tumor during therapy. The next goal is to recognize relapse sooner than one can with radiological techniques and clinical systems today and consider early and efficient switch of therapy. 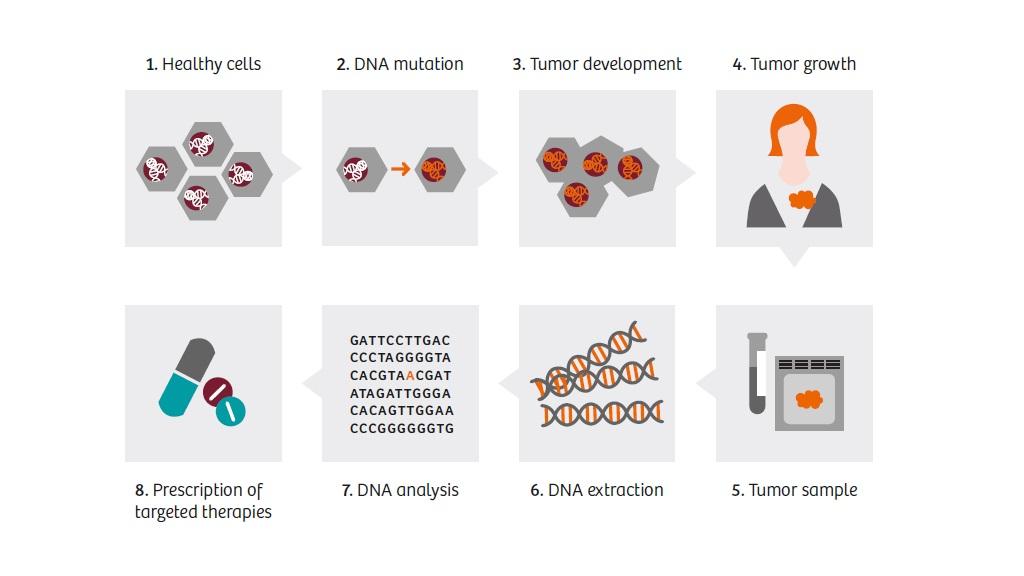 Cancer develops when certain DNA mutations occur in cells of the human body. These mutations can differ from patient to patient, but all lead to uncontrolled cell divisions and cause the growth of tumors. Nowadays, targeted therapies exist that inhibit the individual underlying cellular mechanisms leading to tumor growth. In order to personalize cancer therapy, the molecular tumor profile of each patient first has to be identified. Tissue samples from biopsies can be used to extract the DNA and decipher the genetic code of the individual sample. Where a tissue biopsy is not possible or the available sample material is limited, the molecular analysis can also be performed on a blood sample, since a tumor releases DNA into the patient's blood stream. This noninvasive analysis of circulating tumor DNA is called a “liquid biopsy” and offers a low-risk alternative to tissue testing. Siemens Healthineers offers comprehensive assays for molecular cancer diagnostics from both tissue samples and liquid biopsies.

DNA mutations can occur at different sites in the human genome. Not all mutations are harmful and lead to severe diseases such as cancer. For a targeted analysis of cancer-relevant mutations, the DNA fragments carrying the genes of interest can be enriched using hybrid-capture technology and subsequently analyzed via next-generation sequencing (NGS). This technology allows the analysis of most clinically relevant genes from one single sample in one single experiment. NGS entails the bioinformatic analysis of huge datasets that are generated during the deciphering of the genetic information. NEO New Oncology, a Siemens Healthineers subsidiary, enables pathologists to employ hybrid-capture technology in their laboratories using the NEOonsite1 platform. NEOonsite1 combines reagents for enriching the cancer-relevant DNA fragments with bioinformatics to analyze the genetic information as well as the NEOdiagnosis2 software to interpret the DNA mutations. This allows the pathologist to give reliable recommendations for targeted cancer therapies in a timely manner.

The Cologne-based diagnostics company NEO New Oncology was founded in 2012 by Professor Axel Ullrich and Professor Roman Thomas. Its aim is to use cutting-edge scientific findings in molecular tumor biology to assist physicians in selecting the best possible cancer therapy for their patients.
NEO New Oncology employs specialists in the fields of cancer genomics, translational medicine, bioinformatics, and diagnostic quality assurance. Since May 2016, NEO New Oncology has been a subsidiary of Siemens Healthineers.

Siemens Healthineers develops innovations that support better patient outcomes with greater efficiencies, giving providers the confidence they need to meet the challenges of a changing healthcare landscape. As a global leader in medical imaging, laboratory diagnostics, and healthcare information technology, Siemens Healthineers has a keen understanding of the entire patient care continuum – from prevention and early detection to diagnosis and treatment.

By Robert L. Bard
Robert L. Bard is a freelance medical writer certified by the American Medical Writers Association. He also conducts clinical research at the University of Michigan’s Division of Cardiovascular Medicine.